August 5, 2016 No Comments by AsianDate 3 minutes to read 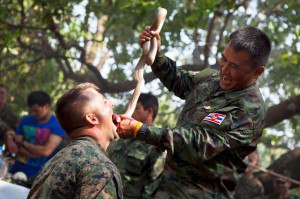 You may not know it, but there are lots of reasons to drink cobra blood. Don’t believe us? Just ask the US Marines who partook during in-depth jungle survival training, or “Bizarre Foods” host Andrew Zimmern, who tipped back a glass just for the taste of it.

Snakes have been prominently featured in culture and healing throughout history, even having a starring role in the most famous story from the Bible. Asian medicinal practices have been using various snake parts in treatment since 100 AD. Cobra blood in particular is prized for its supposed healing properties, and has been used for everything from rashes and arthritis to surgical recovery and cancer.

There is, however, a slightly more salacious motivation driving those who visit snake blood purveyors in Indonesia and other parts of Southeast Asia: S-E-X.

Cobra blood has long been revered as a potent aphrodisiac and libido kick-starter. Visitors to these regions will find cobra blood offered in certain bars, restaurants, and also trucks and trolleys on the street. There is no conclusive scientific or medical evidence to the sex-drive-boosting claims, but that doesn’t stop masses of people from squeezing fresh blood from a snake’s body into their mouth.

That, or sucking the blood directly from the body of a snake that has just been beheaded in front of you, is the best way to consume the blood. And let’s be honest, it’s also the most badass. We even have a hunch that this badass-ness could be contributing to these libidinous claims.

Most aphrodisiacs, especially from the Far East, are derived from creatures that are either dangerous or extremely. The belief that power can be drawn from the bodies of rare, poisonous, or fierce animals operates on multiple levels. On one hand, the user can imagine that some part of the animal’s biological fierceness is now literally within them as well, and on the other, it’s thought that ingesting or slaughtering a dangerous animal is in itself a display of bravery and strength. The more poisonous the species is, the more potent its aphrodisiac qualities.

For those who don’t want to suck the blood straight from the snake’s body, there are other options. For the more genteel vampires out there, cobra blood cocktails are quite popular, utilizing a base of rice wine or vodka. Or, you could always toss it back from a shot glass.

Fear not, conservation-minded folks. It’s common to cook up the entire snake once you’re done ingesting its blood, either by roasting the meat and using it in soups, deep-fried on skewers, or just sautéed as a main dish.

There are restaurants that will let you select your snake and aid in its murder, and more adventurous tourists can prove their invincibility by biting the snake’s still-beating heart out of its body and feeling it beat in your mouth before you swallow it. Not kidding. This is a thing that people do.

At that point, it makes sense that your virility would be full and throbbing. But be warned that if you copy this behavior, which many people did after it was portrayed in the 2000 Leonardo DiCaprio movie The Beach, you’re risking infection and possible salmonella poisoning. But that doesn’t matter to a big, strong beast like you, right?

Take a look at the video below to see if you could handle it. Pro tip: It’s perfectly OK to say “no thank you.”