August 2, 2016 No Comments by AsianDate 2 minutes to read 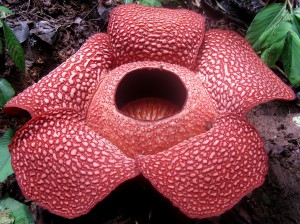 Flowers are generally considered to be nice and pleasant, right? A lovely gift, a very traditional romantic gesture, a way to celebrate special occasions, even a way to say “I love you.”

If you gave someone a Rafflesia, however, it probably wouldn’t go over so well. More than likely, they’d be crumbling under the size and weight of the thing, or nauseous from the stench.

The Rafflesia is a parasitic flower native to the jungles of Indonesia, and at 3’6” in diameter and weighing in at 24 lbs., it holds the all-time size record for flowers. When Sir Stamford Raffles discovered the Rafflesia arnoldii in 1818, he described it as “perhaps the largest and most magnificent flower in the world,” and modestly named it after himself and his companion, surgeon-naturalist Dr. James Arnold.

The world’s largest flower lacks many of the traditional markers of what makes a flower: namely leaves, stems, and roots. The huge, five-petaled parasitic flower has nutrient-absorbing threads to suck the life from its host plant; a particular type of vine called the Tetrastigma vine, which grows only in undisturbed rainforests.

There are at least 13 species of Rafflesia, but two of them haven’t been sighted since World War Two and are presumed extinct. The record-holding Rafflesia arnoldii is also facing extinction. To make matters worse, no one has ever cultivated Rafflesia in a garden or laboratory. 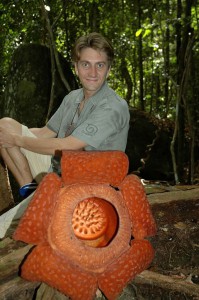 The Rafflesia is commonly referred to as the corpse flower. It was designed by nature to emit a foul odor mimicking rotting flesh, which attracts certain insects like carrion flies, who then provide pollination and ensure that the stinky circle of life carries on. The repulsive smell of the flower is due to the reddish tentacle-like, branched ramentae, inside the corolla of petals.

The Rafflesia arnoldii is an iconic symbol of the Southeast Asian rainforest, and is often used in tourist brochures to symbolize the rich biodiversity of the region’s forests. The flower has also been depicted on Indonesian postage stamps on several occasions. The flower is used as the symbol of the Flora Malesiana project, which aims to describe all flowering plants from the region between Thailand and Australia.

Although officially on the endangered list, the shockingly large and stinky flowers are a tourist staple. The flowers appear on national Indonesian literature and brochures, and draw intrigued visitors from far and wide.

The Rafflesia won’t win any beauty contests (or be handed out to any pageant winners either,) but it has value as part of Indonesia’s ecosystem and tourism industry. Just steer clear of them come Valentine’s Day unless you want to start a fight.