Can’t Start Your Day Without Coffee? You Have Indonesia To Thank; Specifically the Island of Java

First of all, did you know that coffee grows on trees? What we know as coffee beans are actually coffee seeds from a fruit called a “cherry” that grows on tall coffee trees in more than 70 different countries. Not all of that bounty will be suitable for your morning commute, though. Very specific conditions are necessary to produce coffee crops with high quality beans. 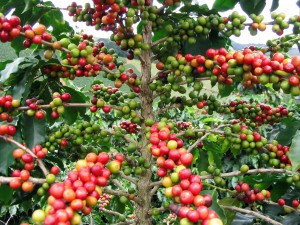 Coffee production is at its prime around the equator, as these areas provide the desired conditions to grow perfect crops. Ideal temperatures for coffee are between 60 and 70 degrees Fahrenheit, and rainfall should be over six inches a month.

The trees also require quick draining soil and humidity helps to produce good crops. This is why coffee is commonly grown in elevated locations, to get the best crop possible. These equatorial regions are called the “bean belt,” a strip of the planet that would cut straight across a map. However, coffee grown at these levels will be more expensive because there is less oxygen, which means the coffee takes longer to mature.

Many of Indonesia’s islands fit this description, which is why the island nation is one of the world’s leading producers of coffee. Brazil still holds the top spot, but Indonesia isn’t far behind, having had coffee harvesting introduced to the region by Dutch colonizers in the 17th century.

Much of Indonesia as a whole harvests and exports Robusta coffee, but the island of Java exports Arabica beans; Robusta and Arabica are the two types of coffee most widely grown and harvested. There has been contention about the differences between Robusta and Arabica coffees, but experts generally agree that Robusta is higher in caffeine content but lower in general quality than Arabica, therefore accounting for less than a quarter of the worldwide production of coffee. 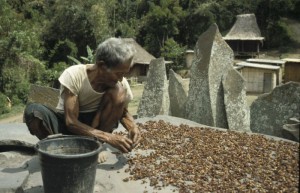 The finest Java coffee comes from plantations on the five largest estates established by the Dutch government when Java was part of the Dutch East Indies. The largest coffee estates on Java, encompassing nearly 10,000 acres of coffee plantings, are Djampit (the biggest producer), Blawan, Pancoer, and Kayumas. Coffee has been growing in this area since the 17th century and has become one of the coffees enjoyed most frequently by people all around the world.

People who know the specific region where their coffee beans were sourced might use the name of the region when referring to it for accuracy. Similarly, coffee connoisseurs, not unlike wine lovers or professional sommeliers, might use the proper regional name out of respect.

Then there are the rest of us, the loads of people who call coffee “java” without really considering the literal source, the island of Java. “Java” has become near-ubiquitous as slang for coffee. By any name, coffee is a necessity for many, and now you know a bit more about how it gets from the tree to your lips.