The Borobudur Temple May Fall Short of the Seven Wonders of the World List, But It’s Still Pretty Awesome 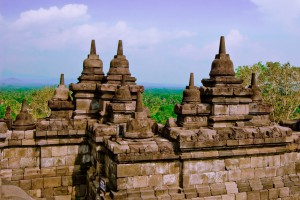 Sometimes we just have to pause our fantastic internet-fueled 21st century lives to appreciate elements of the world that have outlived us, centuries over. This is one of those times, and Indonesia’s Borobudur temple is one of those things.

The magnificent Borobudur temple is the world’s biggest Buddhist monument. Built during the reign of the Syailendra dynasty, the temple’s design in the Gupta architecture style reflects India’s influence on the region, yet there are enough indigenous scenes and elements incorporated to make Borobudur uniquely Indonesian. This awe-inspiring monument is Indonesia’s most visited tourist attraction, and a famous icon of Indonesia’s cultural heritage.

The monument is located in the Kedu Valley, in the south central part of the island of Java. The full Borobudur Temple Compound consists of three monuments: the Borobudur temple and two smaller temples situated to the east on a straight axis to Borobudur. The two temples are the Mendut Temple, whose depiction of Buddha is represented by a formidable monolith accompanied by two Bodhisattvas, and the Pawon Temple, a smaller temple whose inner space does not reveal which deity might have been the object of worship. Those three monuments represent phases in the attainment of Nirvana.

The structure, composed of 55,000 square meters of lava-rock is erected on a hill in the form of a stepped-pyramid of six rectangular stories, three circular terraces, and a central stupa forming the summit. The whole structure is in the form of a lotus, the sacred flower of Buddha.

There is no historical record of exactly who is responsible for building the massive temple, but comparison of the conditions of different carvings and the traditional inscriptions made at the outset or end of such a massive undertaking place its construction between approximately 750 AD and 825 AD. So, it took a human life span to erect, and it’s been in place for over a millennium.

It hasn’t been an uneventful millennium-and-then-some for the Borobudur temple, though. Ravaged by weather, volcanic ash, and natural jungle overgrowth, it was essentially abandoned and left to decay, only to be “rediscovered” in the early 1800s when British and Dutch colonizers set out on expeditions to take full inventory of their new terrain.

It was a curio, visitor attraction, and source of looted souvenirs for the remainder of that century, until government officials embarked upon a restoration between 1907 and 1911. That was focused primarily on cleaning the sculptures, but subsequent restoration efforts would be needed to address moisture and drainage issues and structural damage.

A full restoration was launched by the Indonesian government, with aid from the United Nations Educational, Scientific and Cultural Organization (UNESCO). That took from 1975 to 1982, leading to UNESCO listing Borobudur as a World Heritage Site.

Although it is frequently referred to as “one of the seven wonders,” it is unclear whether Borobudur temple was ever actually on an internationally recognized list of the Seven Wonders of the World, as there have been a number of lists compiled and revised since the 1st list of ancient wonders, but there has been recent outrage that a campaign to include Borobudur on the “New 7 Wonders” list was unsuccessful. It is a wonder in the court of public opinion, and it is undeniably an awesome marvel of design, construction, and longevity.