The Haunted Hotels of Bangkok

Thailand hosts more than 27 million visitors a year, with many of them at least passing through the bustling capital city of Bangkok. Remarkably, large numbers of these visitors who stay in Bangkok hotels might end up encountering another kind of visitor: the paranormal kind. 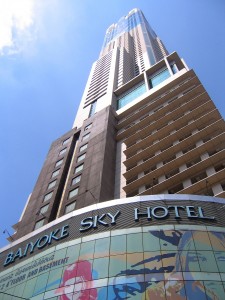 It’s not every day that you see a headline on Trip Advisor simply titled “Haunted Hotel,” but that’s exactly what one user posted after staying at First House Bangkok. They cited lifts jumping from floor to floor, and the electricity flickering on and off with a bang while trying to watch a movie.

Another online reviewer describes their experiences at an unnamed Bangkok hotel as straight out of a horror movie, including the hotel clerk casually referring to an apparently known ghost as “the owner of the bed” who might see fit to disturb hotel guests that they didn’t care for who laid in it.

According to online sources and interviews, First Hotel Bangkok has provided visitors with numerous ghostly sightings. A fire engulfed the hotel on New Year’s Day 1998, injuring 36 people and killing 13, among them a Singaporean singer by the name of Shi Ni, whose body was found charred beyond recognition in the hotel’s nightclub. Spirits are said to haunt the grounds after suffering violent deaths in the destructive blaze.

At Bangkok’s Asia Hotel, there have been reports of occupants being touched in their sleep, strange apparitions, and crying coming from rooms. This particularly harrowing tale sounds straight out of Wes Craven’s nightmarish imagination: A couple staying at the hotel experienced all of these phenomena, and then complained to the manager, only to have the manager deny ever having received any such complaint.

The Baiyoke Sky Hotel, also in Bangkok, was Thailand’s tallest hotel as recently as 2011, towering 88 stories above Bangkok’s skyline. Three construction workers died when they fell from a suspended platform at the 69th floor of Baiyoke Tower II, and it is widely reported that it might be their spirits that guests say they can feel “watching them.”

There are also many reports of television and movie controllers seeming possessed, and volume controls seemingly being controlled by an unseen presence.

Whether you are superstitious or not, there seems to be an abundance of ghost stories about these particular hotels circulating online. If you fancy yourself a ghost hunter, staying overnight in one of these spots might be an exciting proposition for you!

If you do find yourself in a questionable paranormal surrounding (and that’s not your cup of tea), there’s a belief that if there are spirits inhabiting a room, knock before entering and you won’t incur their wrath. You would be peeved if someone barged into your room without knocking, and it appears things don’t change when you’re dead. Don’t be rude and you won’t be spooked.