Komodo Dragons are not Mythical Dragons; They’re Real and They Will Bite You in Half 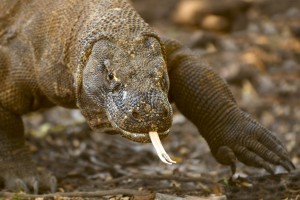 Scientific author David Quammen has been quoted saying that the face of a Komodo dragon can appear “as gentle and dim as a basset hound’s,” but you’re certainly not going to want to take one for a walk or toss a Frisbee for it to catch.

The Komodo dragon, named for one of the small Indonesian islands it inhabits, is the largest living lizard in the world. Average size range is about 6-7 feet long and around 175 pounds, though they have been measured at 10 feet in length, and weighing over 300 pounds. The linebacker-sized lizards can also run up to 11 mph when on the hunt.

The Komodo dragon doesn’t hunt purely with speed and brawn, however, but with the poisoning and paralysis caused by its bacteria-filled saliva. As the dominant predators on the handful of islands they inhabit, they’ll eat almost anything; carrion, deer, pigs, smaller dragons, even large water buffalo, and humans.

When hunting, Komodo dragons rely on camouflage and patience, lying in wait for passing prey. When a victim ambles by, the dragon springs, using its powerful legs, sharp claws, and serrated, shark-like teeth to eviscerate its prey. Escaping the jaws of a Komodo dragon, getting away with only a bite or a scrape but living on to tell the tale, is not really an escape, but a prelude to a slow, painful death.

All that bacteria in the dragon saliva goes to work on its prey, and within 24 hours to a few days, the stricken creature usually dies of blood poisoning. Dragons calmly follow an escapee for miles as the bacteria takes effect, using their keen sense of smell to hone in on the corpse. A dragon can eat a whopping 80 percent of its body weight in a single feeding.

Large mammalian carnivores, such as lions, tend to leave 25 to 30 percent of their kill unconsumed, declining the intestines, hide, skeleton, and hooves. Komodo dragons eat much more efficiently, forsaking only about 12 percent of the prey. They eat bones, hooves, and swaths of hide. They also eat intestines, but only after swinging them vigorously to scatter their contents. This behavior removes feces from the meal.

Because large Komodo dragons cannibalize young ones, the young often roll in fecal material, thereby assuming a scent that the large dragons avoid. The savagery of their elders makes such desperate measures necessary, and is also their own fate. 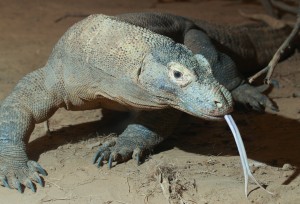 There have been a few instances of humans surviving a Komodo dragon attack, when medical assistance was administered immediately and the bite was not severe to begin with. The jaws of the Komodo dragon can snap an average-sized human in half, but in 2009, a Komodo National Park ranger on Indonesia’s Rinca Island named Maen was miraculously spared after being bitten on his arm.

The dragon snuck into Maen’s office and initially lunged at his leg, and the bite occurred in the ensuing scuffle. After reconstructive surgery and six months of recovery, Maen is back on the job.

Maen was lucky to be at work when he was attacked, as opposed to Phil Bronstein, who was bitten on his foot by a Komodo in 2011. The executive editor had been taking a private behind-the-scenes tour of the Los Angeles Zoo, organized by his then-wife Sharon Stone as a gift because he had always wanted to see a Komodo up close. He also recovered, after surgery and treatment with extensive antibiotics, and his story reminds us to be careful what you wish for, especially if your wish involves dragons.