Everything’s Bigger in Thailand, Not Texas!

February 3, 2016 No Comments by AsianDate 2 minutes to read

It Turns Out Everything’s Bigger in Thailand, Not Texas! 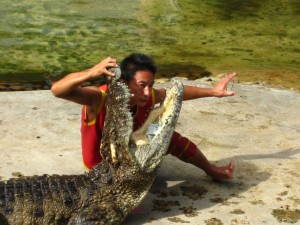 The United States does most things big, and the expression about Texas holds true for cattle, land, and hairstyle height, but it turns out that Thailand holds the record for quite a few of the most random largest things in the entire world:

Located in downtown Bangkok, the pool is 13,600 square meters large, with waves that can be up to 1.5 meters high! Though the park takes meticulous care to control the waves for visitors’ safety.

At the crocodile farm, there is a crocodile nursery where you might be lucky enough to see an eggs hatch and baby crocodiles emerge. However, the farm is not restricted to crocodiles; there are also elephants, lions, tigers, hippos and monkeys. In the regular crocodile shows, the handlers tempt fate when they put their heads inside the gaping mouth of a fully-grown crocodile. The elephants can walk tightropes, skateboard and dance, and there’s a dinosaur museum, paddleboat rides and elephant rides for entertainment.

With Buddhism being the main religion practiced in Thailand, it’s not a surprise that statues of the deity abound. Being home to the largest gold Buddha in the entire world, however, was exactly that—a surprise.

The statue was covered in plaster, likely to hide its true value from potential wrongdoers, and was housed in its plaster form at Thailand’s Phraya Krai temple during 1824-1851. It had to be moved in the early part of the next century, and the movers accidentally broke the plaster cover, revealing 5 tons of solid gold.

Valued by today’s gold prices at about $300 million (US), the statue weighs 5.5 metric tons and measures at an imposing 3 meters tall. The Buddha image was named as Phra Maha Suwan Patimakorn, Sukhothai art, dating as far back as 700 years ago.

Measured not in weight but in length, the longest catwalk in the world was in Thailand in 2010, constructed in Pattaya City, Thailand, in celebration of Pattaya International fashion week. The slick modeling runway was officially measured at 1594.7 meters (about 1 mile long). Thailand’s Deputy Minister of Commerce, Pattaya’s mayor, 15 ambassadors’ wives, and a slew of professional models walked the catwalk to the cheers of the crowds who had gathered to watch the event.