Snacking on Insects: The Bug Carts of Thailand 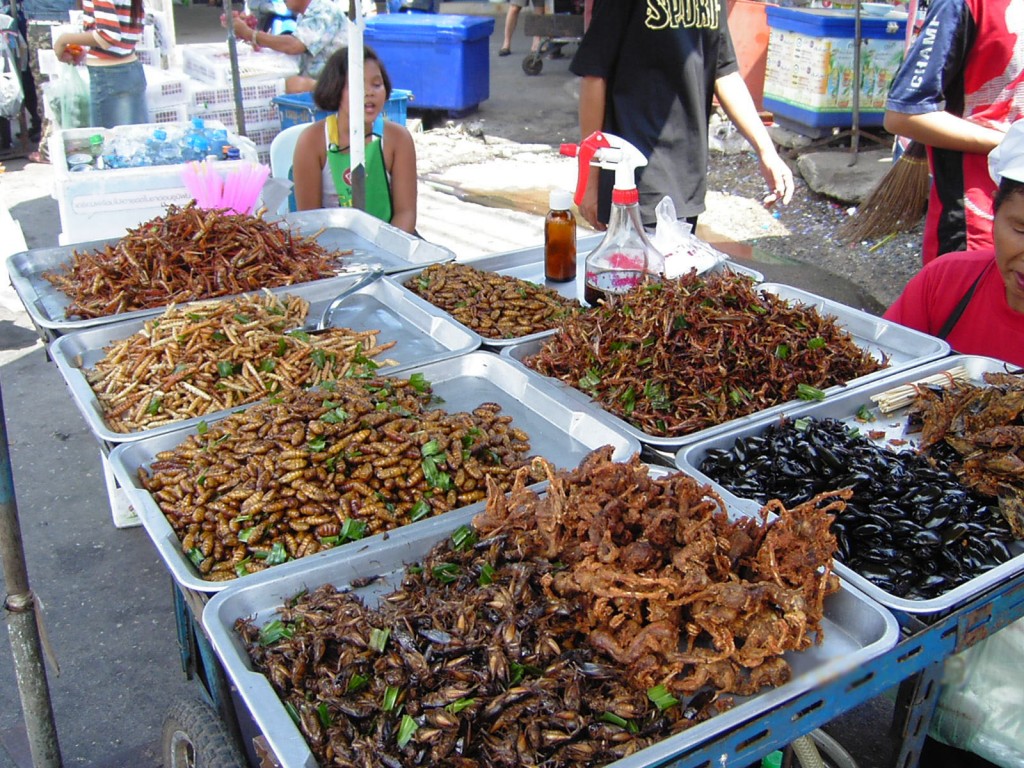 In Thailand, as in many parts of the world, street vendors are widely available to satisfy your cravings with tasty treats swiftly and conveniently. However, what’s unique in Thailand is that those tasty treats often include insects.

Fresh bugs are prepared in a variety of ways for human consumption. Throughout Thailand you’ll find carts piled high with freshly cooked bugs, and grabbing one of these exotic snacks is one of the top things to do while you’re in Bangkok.

Sometimes edible insects are cooked within certain Thai dishes, but most of the time they are deep fried, heavily salted, and eaten as a protein-enriched snack.

A bug cart can look like a mass bug graveyard, with abundant piles of creatures on big platters. An insect cart in Thailand will often include 5-10 different choices. Once you’ve selected your insects and worms, the vendor will normally give them a mist of soy sauce from a spray bottle and a dash of pepper to top them off before handing them to you in a plastic bag.

Eating bugs and similar creatures might seem a bit unsettling for the uninitiated, but they’re all safe to eat, and are actually “high in nutritional value, beating both meat and fish in protein content and quality.” They’re also rich in fiber, copper iron, magnesium, phosphorus, selenium and zinc.

Grasshoppers are among the most common street snacks on any Thai bug cart. Most of them are around 10 centimeters in length and are cooked fully intact. Like most of the bugs, they’re deep fried to a crisp and salted well, and you can plop the entire grasshopper into your mouth in a single bite.

Giant water bugs in Thailand are known as maeng daa (แมงดา), and their essence is commonly extracted and added to special Thai nam prik chili sauces. They can be fried or boiled, and in order to eat them, you need to amputate the hard outer wings. Pull them off before digging into the meat and eggs of the body, and finally fish out all the meat from the head.

Crickets are another widely available snack, and some of the larger varieties can have razor sharp legs and little claws, so you have to be careful not to cut your tongue when tossing one into your mouth. The entire cricket is edible, but some find it beneficial to pull off the nasty legs prior to consumption.

Silk worms are yet another variety of buggy snack, and they’re generally more mushy than crispy, even when deep fried. Most people just mush and swallow them, or swallow them whole like a little pill. The same goes for another Thai favorite: thin white bamboo worms, which are about 2-3 centimeters in length. Some food bug merchants offer up to a dozen varieties of bug snacks, including more exotic items like red ants and scorpions.